The Community Energy movement has delivered an impressive range of schemes over the last ten years, including, wind, solar, hydro, and even a few heat schemes. However many of these schemes were reliant on support that is no longer available now that the Feed In Tariff (FiT) has gone and the Renewable Heat Incentive (RHI) is going. There is no replacement on the cards for the former and the limited proposed replacement for the RHI does not look suitable for Community Energy schemes. There have also been changes to planning legislation that severely impact wind projects.

So what Community Energy schemes can we still progress in 2021?

In almost all cases we now need to sell a large proportion of our energy directly to an end-user, such as a factory, office, care home, community building etc. This is sometimes called a ‘private wire’ arrangement. The electricity rates available from selling directly to the grid are just not high enough on their own to make the average Community Energy scheme viable.

It can be really hard to find energy uses that are matched to the scale of renewable energy projects.  One option is to go small and try to match technologies to the users requirements. In most cases this doesn’t work well – community energy projects with very small installations end up top-heavy, with excessive overheads in both cost and volunteer time terms. In practice there is a minimum scale below which most technologies do not tend to work very well. The other option is to go for economies of scale and connect straight to grid. That immediately takes us somewhere beyond the £10m mark. Of course, community energy can go there – but it’s daunting for all but very established groups.

Let’s look at the key technologies:

In England, onshore wind is currently being held back by the planning system where there has been a virtual ban on wind turbines since 2015. Even if we can get planning permission, as in Scotland and Wales, it is hard to make wind add up financially on anything but a very large scale (£20m+), on very good wind sites (above around 7 m/s average windspeed). Taking these factors together, there has been a huge drop in community wind projects.

That’s completely bonkers in our view, when wind is one of our cheapest renewables, and when we have over 20 years of success with community wind under our belts as a movement. So what can we do:

A note on wind technology. In general small wind turbines (under around 100 kW) are more bother than they are worth. The costs of maintaining them become excessive and when the manufacturer goes out of business it may be hard or impossible to find spare parts. Be very cautious around any claims of radical new technology in wind – it is a minefield of chancers and dreamers. Modern conventional wind turbines can extract 90% of the theoretical maximum energy in the wind. Huge improvements on that? Physics says no!

Unfortunately community hydro is almost completely paused at the moment. Hydro schemes have high capital costs by their very nature, and as the technology is mature there is very little scope for reduction in costs. Even though hydro schemes are potentially very long-lasting,  it is very hard indeed to make them financially viable without subsidy. This basically rules out run-of-river hydro in most of the UK completely, unless a very significant source of grant funding can be found to pay for capital costs. That’s rare, and non-replicable.

High-head schemes (where the drop to the turbine is 100m vertically or more) are generally the least costly. In theory a high-head scheme which provided energy direct to a local user could still be viable. Such sites are really rare however and are only to be found in mountainous areas. 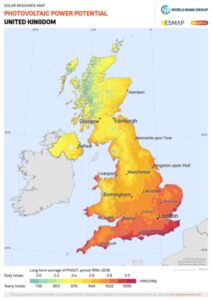 Solar PV has also taken a serious hit with the end of subsidy. But many schemes remain viable with careful planning. Solar PV installation prices have fallen substantially over the last few years and it’s relatively easy to get planning permission for rooftop or smaller ground mounted schemes.

The minimum viable size for a straight-to-grid ground-mounted scheme is around 20 MW at present (around £10m). That minimum viable size is declining slowly as PV prices drop and new technologies come in, but projected revenues are also dropping. For many community energy groups that is too big to take on, even though some funding via RCEF may be available to do feasibility and preparatory work. For anything smaller you will still need a direct wire with a reasonably high direct use of the electricity generated, especially if you live in the northern half of the UK where the output will be significantly lower than in the South.

For rooftop solar the picture is mixed. Some well-established solar co-ops in the South are adding new solar to their existing portfolios, choosing low-risk sites which use close to 100% of the energy generated on-site. Where these ideal conditions are not found, it is a lot more challenging. You need to have many sites with high energy usage to balance the risks of one of your energy users going bust, moving or making energy efficiency improvements (great for the planet, a blow to the viability of solar!)

That’s why we are setting up the Big Solar Coop. It’s a UK-wide co-op with local groups. We are spreading risks and sharing everything in a bid to make many more solar sites viable in many more places. If you are a new or existing group wanting to build rooftop solar locally please talk to us about how the Big Solar Coop can help to make this happen.

Sharenergy has always been very keen on community heat. Not only is heat a major source of carbon emissions, but heat projects require long-term stable entities to run them – co-ops are ideal. We helped to set up some of the UKs first heat coops, all based on biomass. More recently we have moved on from biomass – sources of suitable fuel are very few and far between, and we feel that in the intervening years technology has moved on so that we have to look at electrification of heat as the main technological solution.

We have been looking seriously at shared loop ground source heat pump schemes, but with the end of the RHI these will not work in a community model. It may be possible to get funding for a much larger heat network, as in Swaffham Prior, but this would need at least 100 houses. There is talk about heat network funding criteria being altered to allow for smaller schemes, but again there is no sign of this yet.

Our work on heat is not currently yielding projects that are ready to go immediately, but we are trying to get a slate of projects ready to go as soon as they become viable. Heat policy is in flux at the moment and there is some hope of better incentives over the next few years. Current very low fossil fuel prices would not have to rise much for new projects to add up.

We hear a lot about the potential battery storage schemes. On a small scale most schemes are non-viable financially. Some commercial operators are making batteries work at a larger scale. Unfortunately the income streams from large scale battery storage are very unpredictable, making it difficult to predict financial performance over more than a year or two. Battery storage is probably better suited to venture capital which is prepared to take significant risks spread over a number of schemes.  This situation could change rapidly so we are keeping an open mind.

Do we have to connect direct to energy users? Can’t we use the grid to our advantage when trying to link our generation to a user? There is a lot of interest in arrangements where energy is either sold locally to the generator, or sold to a distant user via a ‘sleeved’ Power Purchase Agreement (PPA) or similar arrangement.

Both approaches may eventually lead to new viable projects. At the moment, there are pilot schemes for local energy use. While these are really interesting and useful, they don’t yet provide the basis for longterm business plans – they have to be grafted onto projects that already add up financially (generally older FiT -supported projects). There is also interest in the idea that electricity users like councils who are theoretically signed up to Climate Emergencies could pay more for energy sourced from community wind or solar farms. Many such users are in financially poor positions at the moment however, so this is not yet an option for most projects.

There are always new ideas we have not tried yet and if they seem promising let’s have a go together!

If you have an idea for a more innovative scheme that would not be viable as a Community project without grant funding at the moment, then the other option is to go for some innovation funding, such as the Next Generation grants. This particular programme is not accepting new applications at the moment, but it would be worth keeping an eye open for it re-opening, or for similar schemes in the future.

This page is an outline guide to the situation at the time of writing. If you have an idea for a project or would just like to talk things over please just contact our Development Manager, Dave Green or our Big Solar Co-ordinator, Noel Lambert. We are always very happy to help community energy groups think through their ideas – it’s how almost all the successful projects we have worked with first started.