Neen Sollars Community Hydro owns and runs a 12.5kW hydroelectric installation at Tetstill Mill, Neen Sollars on the River Rea. The project is funded by a co-operative share issue and owned by local people. The turbine provides green electricity to the local electrical grid, potentially corresponding to around 10-20% of the domestic power use in Neen Sollars.

The turbine has had serious operational issues due to the installer going bust but is being brought back into full production by a volunteer team of members and supporters. 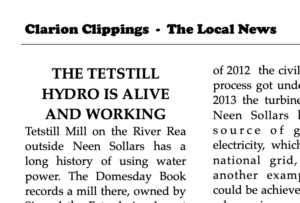 Our project was featured in the local Cleobury Clarion of July 2021, showcasing the renaissance of the hydro and the hard work of the team in getting it up and running.

Over the last year we generated around 50 MWh – twice the amount we generated in all previous years put together.

For this our thanks go out to the NSCH Board, site team, Derwent Hydro, Shropshire Council, Sharenergy and the Flooks (our landowners at the site). For a great visual demonstration of the work they do see our power output graph from a day in early December. You can see the hydro getting gunged up with leaves and debris overnight and the power output dropping – until Kevin attacks the screen with a rake in the morning bright and early and the power jumps back up!

Posted in Info | Comments Off on Local press report on turbine

We carried out a major plant upgrade in the autumn of 2020. The initial impetus was to repair damage from the floods earlier in the year and to carry out changes to our grid connection relay as required by changes in the grid code. We intended to use this opportunity to rewire and re-site our control panel and to upgrade our control technology,

In the event, the overhaul of the plant we carried out was significantly more complex than envisioned. Some more details are given below. The headline is however that the plant is now running more reliably and at a higher output level than ever before. Our initial aim was to seek reliable operation at 5 kW, and our hope was that over time we might be able to increase that somewhat. We are delighted to say that since restarting the system of December 7th we have seen largely stable operation at an output of around 11 kW (rising to 13kW as a maximum on occasion).

The core work was carried out by Derwent Hydro, with the very helpful assistance of NSCH members: Jon Halle, Jerry Turnbull, Chris Deaves and John Sandison. The step change in performance has depended also on our landowners at Tetstill, Kevin and Querida Flook. Not only did they help us during the installation phase but we now have an operational agreement whereby they keep the hydro screen clean and carry out other operational tasks in exchange for a share of income. We thank both our site team and our landowners for going above and beyond the call of duty on numerous occasions.

The combined effect of improved equipment and improved operational support has been remarkable. Up to 7 December 2020 point the plant had generated 22,756 kWh in total. In the 2 months following that date we added another 14,000 kWh! This is despite the recurrent flood spikes which have obliged us to halt the hydro on 4 separate occasions.

The works were funded partly by grant funds and partly by a short-term loan from Sharenergy which we are now working to pay off. It is too early to guess what the long term financial outcomes will be for members, but what is certain is that our collective effort is now generating very low-carbon energy on the scale we envisaged right back in 2011 when we started work on this project.

Posted in Info | Comments Off on Turbine running reliably 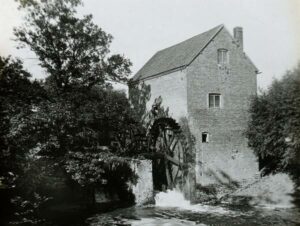 After a period of rain we are pleased to report that the turbine is operating well with nearly 100kWh a day exported in the first 9 days of October. There are still several issues to deal with on site – our logging facility is not working well and we are working through a list of improvements, but we are generating power again, as the Mill has done for centuries. 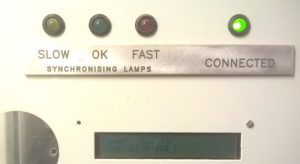 Turbine connected to grid and exporting at 5.2 kW in test mode

The volunteer team working on the turbine have had a notable breakthrough – power has been generated at the site.

Members of the team have been working hard to repair and test the installation over recent months, most recently replacing some ‘stop logs’  – a kind of downstream dam which keeps the outflow tube of the turbine submerged. Nobody had realised quite how essential this item was – when the previous logs had been washed away in a flood, it was thought that this would only reduce efficiency of the turbine. It turns out that the plant simply does not function without this dam. Now the replacement is in situ, the team has managed to generate power for the first time in several months.

Trials of continuous running await higher river levels – England has seen six successive months of below-average rainfall – but with significant rain forecast this week we are hopeful that we will soon be in a position to make a start.

There remain significant mid-term challenges on site – lubrication system, monitoring system and debris screen all need work. But this is a genuine breakthrough for the team and reflects a considerable amount of work done by members and supporters on site.

Posted in Info | Comments Off on Successful tests

The hydro plant is currently non-operational and has worked sporadically since it was installed in July 2014. Following initial teething issues Ampair, the company that designed and installed the turbine, went bankrupt in February 2015 leaving the plant not completely functional. NSCH has attempted to work to get the turbine working again with sporadic support from previous Ampair employees and others but it has become clear that a more comprehensive approach is needed.

NSCH believes that the turbine and civil works are fundamentally sound and that the turbine can be brought back into operation. A team has been brought together of members of the Society and supporters from outside the Society. This team aims to get the turbine reliably operating at the relatively low level of 5kW by the winter season beginning October 2018.

This plan is well advanced and technical experts Derwent Hydro are due on site at the end of March 2018 to carry out works aimed at getting the turbine working reliably. A work party of members and supporters is cleaning the site in preparation on 23 March.

Funding has been obtained from 3 sources. Firstly, several members have kindly offered interest-free loans. Second, Sharenergy Co-operative have offered free annual administration for the project to date and deferral of funds owed from the inception of the project (and have also made an interest-free loan). Third, we have had a very generous grant from Leominster Community Solar which has been invaluable in getting us on the right track.

It is with great sadness that we learn of the death of John Bettinson, owner of and resident of Tetstill Mill. He was the most wonderful supporter or our project – firstly agreeing to let us build a community hydro plant at his home, and then through the intervening years providing so much in the way of flexibility, constructive criticism and good humour. Along with all who knew him will will miss him greatly.

Posted in Info | Comments Off on Sad news at Tetstill

Principle 6 of the International Co-op Principles states that co-ops help each other out – we were the lucky recipient of co-ops in action when Midcounties Co-operative gave us a very welcome £2,000 grant to help with the additional costs we’ve been incurring getting the turbine properly running. We’re very glad to say that the faulty actuator on the turbine has now been replaced and the turbine is now humming away, albeit at a reduced power level of 2kW until all the grid testing is complete.

Posted in Info | Comments Off on Awards and technical progress

Posted on January 22, 2014 by jon
A little while since our last update and a lot has happened. We have had the turbine up and running in test mode and it has produced some energy. The final step to consistent generation is unfortunately taking a lot longer than we hoped. Firstly we encountered some serious snags in the last stages of the civil work – see previous updates for the huge and rock-hard stump we found right in the place where the screen was supposed to go! The delay there had a knock-on effect on installation of the turbine assembly. Once the turbine was fully in place we encountered some problems with the grid voltages meaning each time we switched it on, it tripped out! Finally the ramifications of the delays and difficulties have caused cashflow problems for the co-op. This has all been especially frustrating because river flows have been good for the last few months, but we’ve been unable to benefit from this to make some much-needed income for the co-op.
We’re pleased to say that after a lot of work and negotiation with suppliers we finally feel like we have a working plan to get the turbine up and running very soon. Firstly the co-op will be making a bond issue of around £20,000 to members to raise the additional working capital we need to cover the over-run. At the same time, we are working intensively with our civils contractors and the turbine suppliers to get the turbine spinning reliably. One silver lining in the situation is that we are benefitting from some of the optimisation which has been carried out on a turbine of the same type installed just before ours.
Posted in Info | Comments Off on January update

Stump out and on we go

The rain has come right on time as we enter what is hopefully the final week of installation. The famous stump that we found at the base of the weir has been removed finally and last Friday the slab which will sit below the inlet screen was cast. The screen is set to go in place towards the end of the week – then we can remove the temporary dam and the installation will be physically complete. Our turbine ought to see its first flows for commissioning purposes sometime next week – if that goes well we hope to harvest a little of this rain perhaps even before October is out.

The generator installation was completed on Friday. The system is essentially ready to go once we have the inlet screen in place, which will probably take us into early next week. The photos also show the new eel pass in action. As you can see, flows are still low, so we will have to wait a little while for our first energy generation. 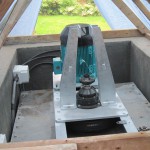 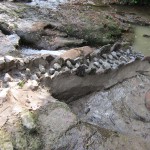 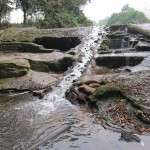 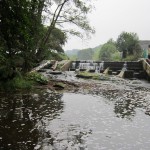 Posted in Info | Comments Off on Generator in place